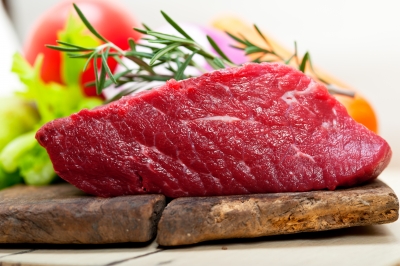 Well, the meat wars have resumed. When new research suggests that the advice people have heard to eat less meat might have been based on weak evidence, and the New York Times sees fit to make it front page news, you know it’ll be one of the most talked about topics in the food and nutrition world. Pass the popcorn.

It was bound to happen: red meat has been touted as unhealthy, processed meat even worse. Yet lean meat is nutrient-rich and can have a place in your diet if you so desire it.  Several new studies, all published September 30 in the Annals of Internal Medicine, concluded the following:

• “The absolute effects of red and processed meat consumption on cancer mortality and incidence are very small, and the evidence is low to very low”.

• The panel conducting the research made a “weak recommendation” for consumers to continue their consumption of meat, noting that “the desirable effects (a potential lowered risk for cancer and cardiometabolic outcomes) associated with reducing meat consumption probably do not outweigh the undesirable effects (impact on quality of life, burden of modifying cultural and personal meal preparation and eating habits).”

• Regarding reduction of cancer and heart-related diseases, they found “Low- or very-low-certainty evidence suggests that dietary patterns with less red and processed meat intake may result in very small reductions in adverse cardiometabolic and cancer outcomes.”

• Omnivores happen to like eating meat and were averse to changing, even “when faced with potentially undesirable health effects.”

None of these latest studies addressed animal welfare or environmental impact of meat consumption. The EAT-Lancet report did however, and looked at an omnivore diet from an environmental and sustainability standpoint, namely that eating meat and all animal foods was unsustainable for the planet. This could be perceived as strategic, as it makes the consumption of animal foods an issue for virtually everyone, not just people interested in health. This “bad-for-the-planet” approach strives to change global dietary culture, almost excluding the consumption of meat and most animal foods.

One thing seldom addressed: meat and animal foods as part of food culture:

• Are the Spanish going to forego their famous Iberian ham, which goes into so many dishes, even diced and added to sautéed vegetables?

• Are the Italians ready to give up their prosciutto and melon?

• Would the French give up omelets?  Cheese, yogurt and milk?

These foods are rooted in centuries of culture and history the world over. As for eating meat, people happen to like it. One of the studies in the Annals concluded that omnivores happen to like eating meat and were averse to changing, even “when faced with potentially undesirable health effects.”

But Are YOU overeating Beef?

Right now, average daily intake of beef is about 2 ounces, or 14 ounces per week. If you keep it to that, and choose the many lean cuts that are available now, you’re probably fine and are also getting the best of the nutrition that beef has to offer. Dairy foods are even more efficiently produced, provide excellent nutrition, and are under-consumed (and underappreciated, IMHO). Make sure to include these, especially low-fat yogurt and milk, if you eat animal foods.

Omnivores can – and should – maintain a plant-based diet, so aim for plenty of fruits, veggies, and beans.

As for the planet, all agriculture in the US generates about 9% of the country’s greenhouse gas, with beef taking up just about 2%. Beef production in this country is amazingly efficient, far more so than in the rest of the world. Indeed, one criticism – a fair one – of the EAT-Lancet report is that it lumped all agriculture together, not focusing on the efficient production of animal foods in more developed countries.

Given the difficulty of changing global food cultures, it may be more useful to help improve the efficiency of global animal agriculture to the level present in developed countries.

Veto The Keto! Here’s Why It ISN’T A Cure-All For Diabetes No, I Don’t Care If Kids Eat Candy on Halloween
Scroll to top