Everyone’s dream: for the healthiest foods to also be the most delicious. Let’s face it, taste often casts the deciding vote about whether we’ll eat a food or not, irrespective of its potential health value. Example: it probably wouldn’t matter how many nutrients are packed into beef liver, or if it were found to cure cancer, many people will refuse to eat it.

As for myself, I practically scour the scientific literature for any and all studies showing a relationship between chocolate and health.

Such studies abound. Do a search for “cocoa and health” on PubMed, the huge online database of scientific research, and over 2,400 published studies and reviews pop up.

What muddies the water a bit though, is the quality of the chocolate/cocoa research varies greatly with the methodology and the form of chocolate/cocoa used. Many different percentages of cocoa turn up, also cocoa extracts, powders and even cocoa flavanol supplements concocted specifically for the study and that aren’t available in the real world.

More aggravating to nutrition research (and chocolate) nerds like myself, are studies that don’t specify the type of dark chocolate or percent cocoa in the test food or drink.

From Bean-to-Body: What happens to all those great cocoa flavanols? 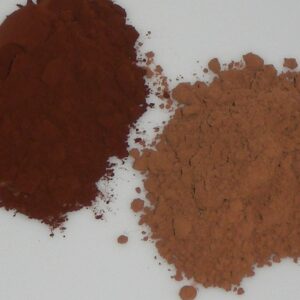 “Dutch-processed” cocoa is the darker one

Flavanol content of chocolate is impacted by many factors. Cacao beans can lose flavanols during the various processing steps of fermentation, drying, roasting, etc. Higher percentage of cocoa in the final product may reflect higher flavanol content, but not a guarantee.

One guarantee of low flavanol level? When chocolate is “alkalinized”, or “Dutch-processed.” Wipes out over 90% of the flavanols. It has culinary properties that some makers like, and won’t be going away, it just isn’t a great source of cocoa flavanols.

For a particular batch of beans/paste/liquor, adding sugar to a chocolate product dilutes the flavanols because it lowers the percentage of cocoa. But quantity of cocoa flavanols present is one thing, the body’s absorption of them is another.

This study found that carbohydrates, and sugar especially, actually enhanced the absorption of cocoa flavanols (referred to in the study as “catechins and “epicatechins”). 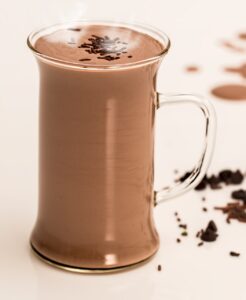 Milk matters! Results also showed that the presence of milk protein slowed the absorption of flavanols when in a confection, but not when the given in a milk-based beverage. The study was done using rats, but a similar study in humans, using the same preparations, found similar results. In fact, in the human study, flavanol absorption was best, and quickest, with the milk-based drink.

This is not to say that the more sugar present, the better the absorption of cocoa flavanols will be. Too much of anything can have unanticipated consequences. These results may suggest that having our cocoa flavanols with a little sugar in the matrix might be better than going full unsweetened.

Fellow hot chocolate lovers, we can exhale now!  I tend to use a lot of cocoa powder in my hot chocolate, along with some spices (I’m into smoked paprika lately).  I’ll often sweeten it with stevia, and spend my sugar calories on a delicious artisan bar to have with my hot chocolate.  Are you with me?