So What ARE “Heirloom” Fruits & Vegetables?

So What ARE “Heirloom” Fruits & Vegetables?

COVID-19 has skyrocketed the interest in home gardening, especially growing their own fruits and vegetables.  Demand for seeds has more than doubled, according to this report. Growing some of your produce is enjoyable, connects you to the food system, and can even boost your spirits.

We also want what we grow to taste great.  It’s one of the reasons for the attraction to “heirloom” varieties of everything from apples to zucchini, which has been increasing since the 70’s, according to USDA. 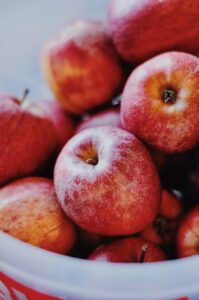 But What Makes It An “Heirloom” Fruit Or Vegetable?

The Cornell Cooperative Extension site had this to say about heirloom fruits and vegetables: “Heirloom varieties are traditional varieties that have been preserved by gardeners for generations and often have great flavor.” Heirloom tomatoes of course, seem to be the fave, even though they’re often in odd shapes or colors, like purple or brown.

To find out more, I went to my colleague, registered dietitian-nutritionist Milton Stokes, PhD, RDN, of Bayer Crop Science, the seed company that develops all manner of seeds for conventional and organic farmers and also sells seed to nurseries.  When I asked how varieties qualify for heirloom designation, he asked some of Bayer’s customers – seed companies and nurseries.

Turns out, there’s no formal definition of “heirloom” fruits and vegetables!

Terroir Seeds stated that an heirloom, “is seed from a plant that has been passed from one generation to another, carefully grown and saved because it is considered valuable. The value could lie in its flavor, productivity, hardiness or adaptability. Many heirlooms have been grown, saved and passed down for more than 100 years. Some have history reaching back 300 years or more. To have been saved and preserved for so long, these seed varieties have shown their value to many people and families for an extremely long time.”

Burpee Seeds (a customer of Bayer’s) has a nice layout of what an heirloom is and the backstory of them:  “The term is usually applied to fruit, flower, or vegetable varieties that were being grown before World War II, but the heirloom definition is open to dispute…From the 1950s to the 1970s, hybrids dominated the commercial vegetable market, and the older varieties became hard to find until a growing interest in cooking and food sparked a resurgence of the more flavorful heirlooms. Heirloom varieties are open-pollinated–meaning that unlike hybrids, seeds you collect from one year will produce plants with most of the characteristics of the parent plant. And that’s key to their survival.”

Bonnie Plants, one of Bayer’s largest home garden customers, echoed the open-pollination distinction of heirlooms, versus hybrids, but also considers heirlooms to be at least 50 years, often older.

Stokes said most heirlooms have been saved and selected because they have the best flavor and production in home and small market gardens. We get the benefit of this long development cycle, as only the best producing, most flavorful, most memorable and most dependable varieties have made the selection throughout the years. Delicate, weak or fickle varieties are no longer with us.  Some heirlooms aren’t productive enough for commercial farming. 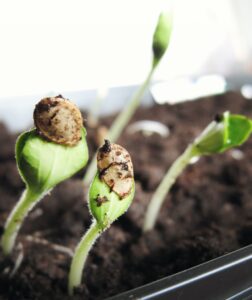 Heirlooms Rock – So Why Make Hybrids?

“Breeders didn’t just wipe old varieties out because of sheer perverseness,” Burpee said. “They developed hybrids for two main reasons: 1) To make large-scale commercial production and distribution of vegetables easier and more profitable. 2) To make growing vegetables less labor-intensive and more sure-fire for home gardeners who may not have been as sure of their skills as their farmer ancestors.”  It’s true that heirlooms can produce less predictably and the fruit can vary in size even on the same plant.

Not completely…there’s actually a formal designation for heirloom cacao.  I wrote about it for The Chocolate Life and you can read the whole article here.