The poor potato has been playing defense for years now.  I speak of “white potatoes”, the poor stepchild of sweet potatoes, which have become the darling of the “starchy vegetable set” because they’re loaded with the antioxidant beta-carotene.

“They’re nothing but empty-calorie carbs.” “Potatoes make you gain weight.” “Diabetics shouldn’t eat them. They have a high glycemic index and shoot up your blood sugar.” “Sweet potatoes are fine. White potatoes don’t have any nutrition.”

OUCH!  Anything GOOD about white potatoes?

A lot, because ALL the above are myths.  Let’s tackle them one-by-one:

Myth #1: “They’re nothing but empty-calorie carbs.”

FASLSE!  Potatoes are absolutely loaded with nutrition (and taste)!  Just some of the nutrients in a modestly-sized baked russet potato (148 grams, or about 5.3 ounces), according to Potatogoodness.com: 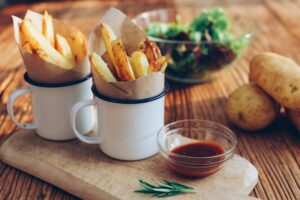 Photo by Dan Counsell on Unsplash

Nope, but let’s clear something up: ANYTHING will cause weight gain if you eat too much of it, because the real cause of weight gain is EXCESS.  Yes, excess sweets and sugar, but even excess amounts of beans, salmon, or EVOO will pack it on.

Other than for raw veggies, right-sized portions are important no matter what you’re eating, even healthy foods.  And prep method counts here, too. Deep-frying ANYTHING, even raw kale, in oil of any sort, ups the calories like mad. Potato chips and French fries get most of their calories from oil, not the potatoes.  People love the combo of added fat and salt, so anything deep-fried is easy to overeat. See below for delicious ways to eat your taters so you can have them more often.

#3 “Diabetics shouldn’t eat potatoes because they have a high glycemic index (GI) and shoot up your blood sugar.”

Registered dietitian-nutritionist Rosanne Rust, literally wrote a book on this.  As author of The Glycemic Index Cookbook For Dummies, she boiled it down by saying, “GI is a ranking given to foods based on how quickly they increase blood sugar levels (High is considered >70, medium 55-69, and low <55). Potatoes do have a moderate glycemic index  of about 55-89, depending on the variety and how it’s cooked. But this number isn’t meaningful on its own.”  Just as important is how it’s eaten.  Few people eat a potato by itself.  Usually it’s part of a meal.  When you eat a potato with protein and veggies, you blunt the rise in blood glucose.

Rust admits there are limits however.  “If you’re talking potato chips, it really doesn’t matter whether they are made from sweet potatoes or white potatoes – they both should be a treat eaten in about a 1-ounce portion, as the fat from frying adds considerable calories, so chips aren’t the best way to benefit from potato nutrition.”

Rust says, “Consumers sometimes view sweet potatoes as “healthier”, but this really isn’t true. Both white and sweet potatoes (or yams) are nutritious and bring their own benefits to the table. For example, in addition to their vitamin C and fiber, “both are good sources of antioxidants.”  The sweet potato – at least the yellow kind, also has beta-carotene, another antioxidant.

And The (Credible) Science Says…