March should probably be called International Nutrition Month, as this year’s theme is “Celebrate a World of Flavors.” It’s all about appreciating how many different cuisines there are in the world, how to incorporate some of those foods, and how to make diverse FLAVORS part of healthy eating styles. I love that adding flavor diversity to foods doesn’t mean elaborate cooking or eating strange or unusual foods.

To me, more flavor means better use of herbs and spices. You probably have lots of unused jars in your spice cabinet and let this be the month you take them OUT of there and put them ON the kitchen counter or, better still, the table.

You can eat roasted carrots 5 times a week and never have the same flavor twice. Just season them differently each time:

Za’atar? You HAVE to Try This Flavor

I love Za’atar.  It’s a blend of herbs and spices, usually including dried oregano, and thyme, but always sesame seeds and sumac, it’s most distinctive flavor. Sumac gives za’atar it’s signature tartness. Some say it’s citrusy, I’d describe it as more of a “tang” which, along with the other dried herbs and toasted sesame seeds, makes for a delicious and unique flavor profile.  Commercial blends may add other spices, but the sumac and sesame seeds are essential.

Za’atar is often used in Greek and Middle Eastern dishes. Since my family background includes both areas, it’s a flavor I’m used to, although it wasn’t easy to find for years, so I pretty much gave up on it. When I visited a new Middle Eastern restaurant in my neighborhood, and saw Za’atar bread on the menu, ordering it was a no brainer. It totally brought me back to childhood, and I knew I had to add it to my spice cabinet.

I buy the stuff in bulk, 4-oz. at a time, from a Greek gourmet food shop where I live in New York, but it’s available online now from all over. The Internet abounds with recipes for making your own za’atar. Here are a few ways to use it:

First time user: Butter a slice of bread (I’ve done this on my homemade sourdough), or brush with a little extra-virgin olive oil, sprinkle on some za’atar and toast under the broiler. 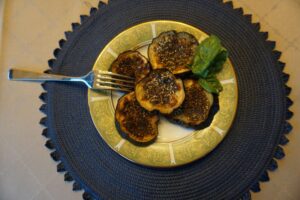 Broiled eggplant with za’atar: a win-win for        maximum flavor with minimum effort!

More adventurous but still simple: I broiled eggplant for dinner yesterday and it couldn’t have been easier:

Season with salt if you like, but I don’t think it needs anything more. **Bonus** — with a foil-lined pan, cleanup is a breeze. **Bonus**: try adding it to plain Greek yogurt for a savory twist. 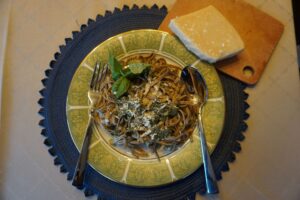 My mother used to think so, but there’s no data to support this. (Food trivia: Shops in the Greek islands often use basil plants as natural room fresheners!) I think it’s seductive in its own way, and making basil pesto at home really perfumes the kitchen.

Here’s a short basil pesto video recipe, but remember the amounts can be flexible. My own “template” recipe (I eyeball the amounts):

I freeze it in 8-oz. containers, covered with a thin layer of EVOO and I lay plastic wrap over that before adding the cover. Ice cube trays are fine as well. Just seal it well, removing as much air as possible.

No pasta? No worries — pesto is terrific on baked potatoes! Broiled salmon (and most fish) also benefits from some pesto’s fresh basil’s aroma & flavors.

I don’t stay in the Mediterranean for my flavors. Lemongrass? Cumin? I love both, and they’re a gateway to south Asian and southeast Asian flavors. Use National Nutrition Month as your own passport to introduce new flavors, even to foods you’re used to.

**Bonus**: the antioxidants in herbs and spices are showing promise for health benefits. Check out the McCormick Science Institute’s scientific overviews of various herbs and spices here. (I’m a member of the Scientific Advisory Council and very proud of the MSI’s work!).