I TRIED “POT” & GOT A LEAN, HEART-HEALTHY BEEF DINNER!

I TRIED “POT” & GOT A LEAN, HEART-HEALTHY BEEF DINNER! 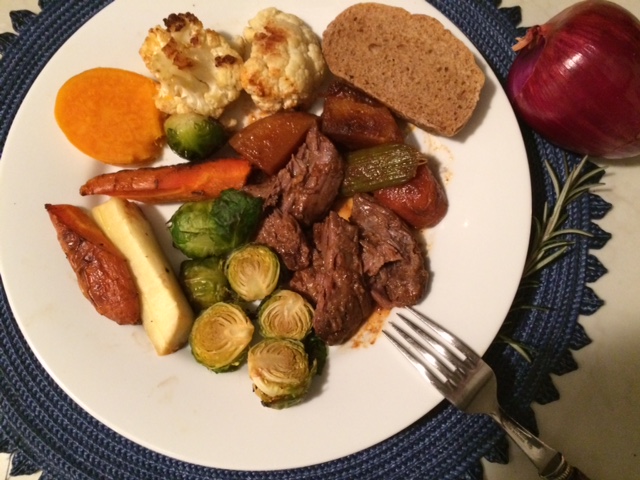 No cannabis involved.  I’m talking about making my first pot roast and it turned out great.

I’ve written earlier about my “grill-phobia” and how I conquered it. Pot roast was my next cooking obstacle to overcome.

It’s also cold, we’re tired of winter, and we’re getting grumpy. We really want comfort food. And we want the kind of comfort food that doesn’t require too much prep work, either. But we need heart-healthy, too.

I mentioned this dilemma to my 90-year-old mother and she suggested a pot roast. I always loved the one she made but figured it was beyond my culinary skills.

Pot roast checked all my boxes though – it’s good comfort food, for sure. Thanks to some great info from the Beef Checkoff folks, at www.beefitswhatsfordinner.com, I learned it was lean (go for a boneless shoulder roast). As for the fuss-factor, the prep time was only about 30 minutes, then the oven does the rest. “Value added”: it lasts for more than one meal, tastes even better the next day, and has lots of veggies, so even more heart-healthy.

I decided on a recipe from the New York Times that we’d clipped out several years ago but never made. It was “adapted from Gavin Kayser” but I adapted it further, based on what I liked and what I had on hand. Here’s how I tweaked it:

• I cut some fat. Instead of 3 tablespoons of canola oil to brown the meat and 3 tablespoons of butter to sear the veggies, I used one scant tablespoon of olive oil for the meat and a dash more for the veggies. I grew up in an olive oil home and I see no reason to change.
• Instead of 8 cremini mushrooms, I used a  10-oz package. Mushrooms add lots of umami and leftover raw mushrooms might go to waste anyway.
• I  only had a cup of red wine instead of the called-for 1½ cups, so I didn’t open another bottle.  And it was merlot, not cabernet. It worked.
• 4 cups of beef broth would have overflowed the pot, so I made do with about 2 cups instead, unsalted.  I’d salt to taste later.

One more little tweak: I added ¼ teaspoon of cinnamon. Mom said, “When you cook with tomatoes, add a little cinnamon. It really adds flavor.” Done. 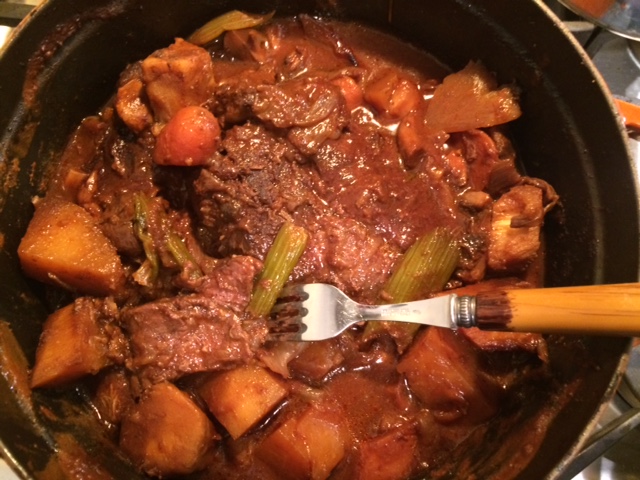 A 3-pound boneless beef shoulder roast (that I got on sale!) works well.  It’s lean, stands up to long, moist cooking, and doesn’t need baby-sitting. Here’s the procedure, and don’t be afraid to change it. It’s forgiving:

Get your seasonings and flavorings together:

HINT: Do the above prep the night before.  I did — it made the actual cooking faster & a blast!

The tomato paste (super-nutritious) and broth worked their magic here for a tasty, rich sauce. Salt to taste, but not until you’re ready to serve it — there’s so much flavor you won’t need to add much.  Since the oven was on, I roasted a bunch of veggies to go with it.  Meal’s complete!

Would I make this again?  Big “yes”, in a healthy heartbeat.

Find even more recipes for pot roast and other lean beef dishes at: https://www.beefitswhatsfordinner.com/recipes