If you want to know what brings out the “food nerd” in this registered dietitian/nutritionist, watch me at the New York Produce Show and Conference.  It’s the “trade show” for growers and distributors of all kinds of produce from all over the country and I jump for joy to attend.

It’s all fruits and vegetables, but you get a preview of what will be happening for consumers in the months ahead, including many of the new varieties of fruits and vegetables that either haven’t hit the market yet or that are readying for national distribution.  It also give me a chance to speak with the growers themselves and learn what they’re hearing from consumers.

A few highlights (not compensated — these thoughts are my own): 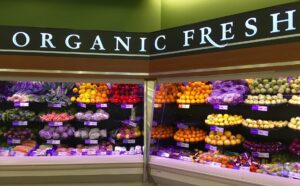 Consumers like fruits and veggies but they don’t’ want to prep, slice, or peel it.  They want turn-key food, and produce folks realized they had to get on this bandwagon if they were going to get, and keep, people interested in buying and eating fresh produce.

Everywhere in the exhibit halls were display cases featuring pre-cut “ingredients” like cleaned and ready-to-roast cauliflower and Brussels sprouts, chopped onions and peppers and of all manner of “stringy” veggies (think zoodles but with both winter and summer squash varieties).

Then there were the new ready-to-eat “finger foods”, mostly cut fruits but there were some surprises.  “Watermelon stix”?  That’s right – watermelon cut in the shape and size of thick French fries!  No knives needed and ready for kids (and adults) to grab from the fridge.  I tasted them and was amazed at how crisp they were.  This owes to the value of plant breeding – new varieties are bred to lose less water when they’re cut and maintain the firmness of the flesh but still have the sweetness you’d expect from ripe watermelon..  They’ll come in both the traditional red and the newer golden varieties, both seedless. 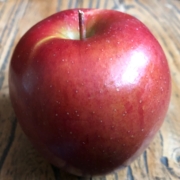 I’m a die-hard apple lover and I put this one to the test.  Jim gave me a Koru to take home and I kept it in my backpack for four days to see how it would hold up. When I bit into it I found it amazingly crisp.  A tart, yet sweet flavor with no astringency.  Thumbs up.  Bonus: the Koru has a smaller core, so you can eat more of it with less waste.

They’re available from October through March.  If you see them in your market, grab them.

People have strong feelings about persimmons, especially the Hachiya persimmon, shaped like a huge acorn. It’s tricky to eat because it tastes best when it’s really soft, but some people are turned off by the almost gelatinous texture.  Eat it before then, when it’s firm, and it’ll pucker your mouth. 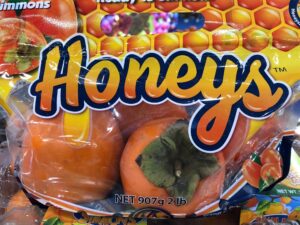 The Fuyu persimmon can be eaten hard, like an apple (it’s one of my favorite fruits and I’ve written about it here).

At the show I tasted a “Honey persimmon” (see right), a Hachiya variety from Brandt Farms in Reedley, California, that looks much like a traditional Hachiya but doesn’t require softening to eat it.  It’s absolutely delicious.  Dave Maddux of Brandt Farms described it as having a lot of mango notes with a hint of cinnamon and he was spot on.  Production was minor this year but Maddux said 2020 the honey persimmon will be busting out nationwide.  They’re a winter fruit, full of nutrients and antioxidants like potassium, vitamin C and carotene, have fiber and add some great variety to the usual winter fruits.  Don’t pass this one up.  Since they look like the regular Hachiyas, the Honeys will be bagged and labeled.

Brandt Farms also grows the Fuyu persimmon – also known as a “Sharon fruit” and – full disclosure – he gave me a bag of them.  We sliced them crosswise, thinly, spread them with goat cheese, topped with another slice, then rolled the sides in chopped almonds.  Guests at our holiday party went crazy for them.  Thanks, Dave! 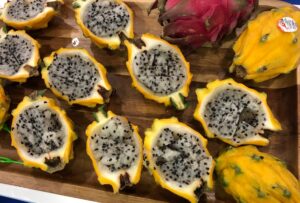 Dragon fruit has been around for years in markets but a big push is on by growers to make them more mainstream.  Dragon fruit is related to the cactus family and the outside betrays a sweet, white flesh inside, studded with tiny seeds.  The taste and texture might remind you of a kiwi-pear hybrid.  Most common are the red ones, but now they share space with a yellow variety.  Nutritionally, it’s got game: a reasonable source of calcium, good fiber, and antioxidants (the red fruit has the same pigment that gives beets their color).  The only drawback: they’re a bit pricey.  But hey, they’re definitely worth trying.  I did, and I liked them.