Some people are surprised to learn that I, as a registered dietitian-nutritionist, eat meat, including beef.  For some reason, they think that eating beef puts someone into a category of eating that minimizes the importance of eating vegetables, fruits, nuts, beans, and other plant foods.  Hardly!

I’d argue that I probably eat more plant foods than most people – even when I’m eating beef.  Here’s an example: 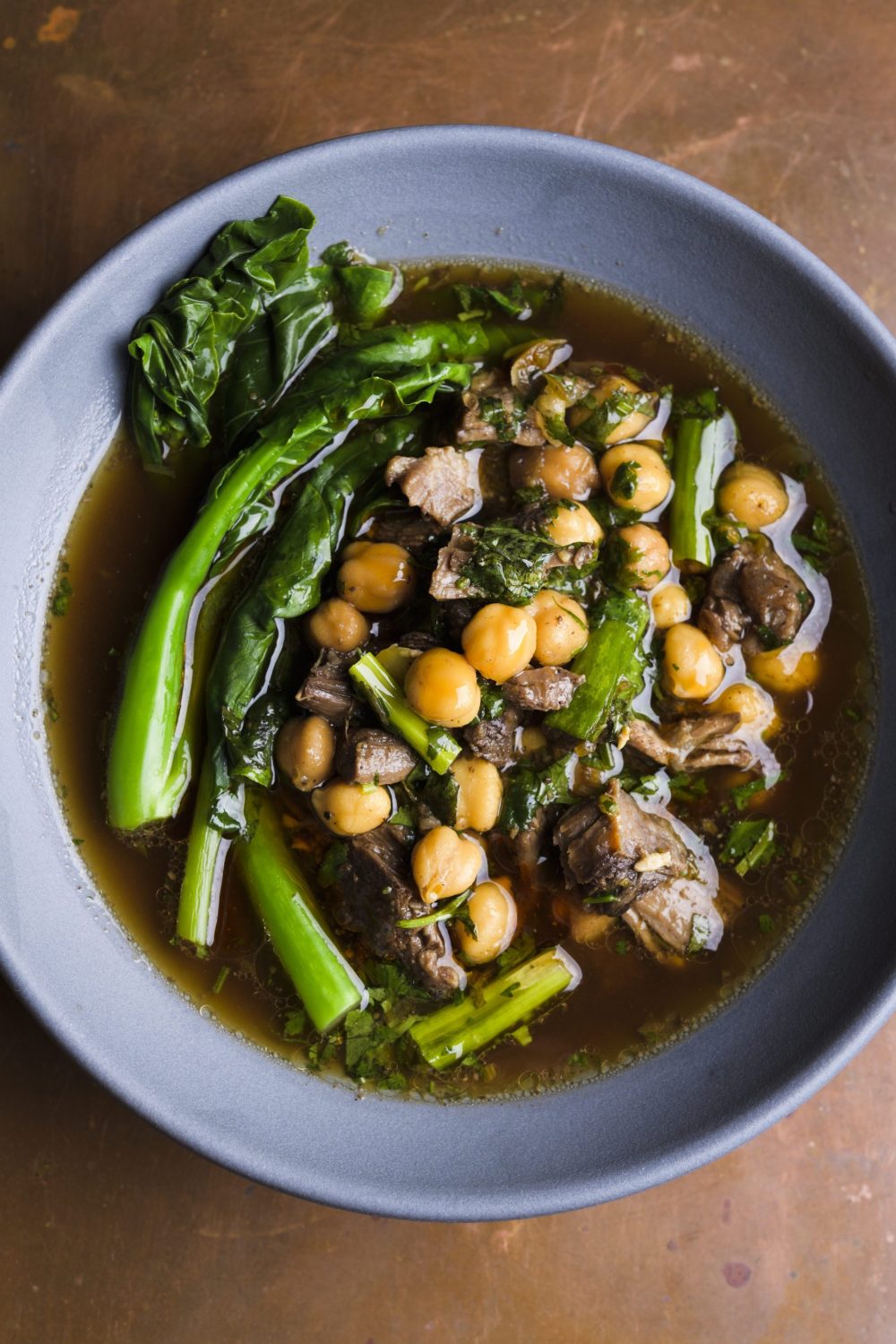 I found a recipe for Chinese-Spiced Beef Stew from Milk Street Magazine (theirs is pictured at left).  It is meant to serve 4 (or more, se below), and includes beef shanks (2 pounds, including the bones,) but also 2 cans of chickpeas, 2 bunches of scallions (including the green parts), a bunch of cilantro (stems and all!), and 6 cloves of garlic, plus the spices of course.

It suggests serving with stir-fried greens or steamed rice, in keeping with the Asian theme.  I did a stir-fry of baby bok choy, but that wasn’t the end of the veggies.

I could have made rice, but we had some local white and sweet potatoes and butternut squash we needed to use, and I don’t waste food.  Perfect. I tossed those guys in a little oil and roasted them as soon as the stew came from the oven.

Still not done with the veggies.  When we eat at home, dinner almost always includes a large mixed salad. Along with the usuals: lettuce, tomatoes, cucumbers, we enhance it with shaved fennel, arugula (if we have some), carrots, celery, and a fresh pear. Whatever is around.

Let go of the idea of eating a 12-oz or 16-oz. steak.  Even carnivores don’t need those portions beef – and NEVER did.  Those 2 pounds of beef shanks included the non-edible bones, so it was less than 2 pounds of edible meat.  Even so, this meal will last our two (hearty) appetites for three dinners – six servings total.

The protein is there!

The beef supplies much of it, but so do the beans!  (The veggies add a bit, too.)  Is it filling?  Oh, yeah, and delicious.  Some grated parmesan went on the salad, for extra umami.  A lot of spices and layered flavors going on in all components of this meal. I toss the roasted veggies with dried oregano and mixed herbs and added some leftover parsley and garlic to the bok choy. Why? Because I had some.

Convenient & almost too easy: No searing of the meat!  Milk Street chefs were right: the herbs and spices made it unnecessary.  The whole thing took me – a home cook – about 15 minutes to throw together.  The oven did the rest. 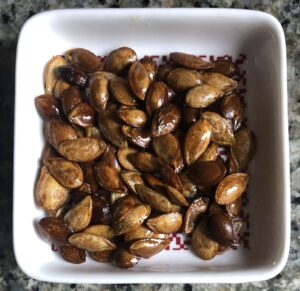 I wasn’t kidding about no waste – for a pre-dinner nibble we munched on the roasted butternut squash seeds.  They’re delicious, and go well with a glass of Riesling, but wine folks will have their own ideas, so I’ll defer.

Yes, you CAN be an omnivore and have a VERY plant-based diet.  Eat right-sized amounts of meat AND still have a full plate.

Note: While I do partner with the Beef Checkoff Program (overseen by USDA), they did not sponsor this post.

(Blooper: I just noticed a chip on the plate!  Sigh…real life!)