My previous EdibleRx post was about great foods that nutritionists are surprised became popular.

My contribution to this conversation? HUMMUS.

Now it’s so common there are hummus-themed restaurants and it’s a standard item om many school lunch menus throughout the US. It has so many variations it’s overwhelming what’s been done to such a humble food.

But growing up, I wouldn’t even eat hummus in front of friends. High “ick” factor to skeptical kids who’d never seen or tasted it. Tell them it’s loaded with garbanzo beans and tahini (another alien food) and you’ve sealed the deal – grimace and all.

Back then, hummus wasn’t sold in supermarkets. We always made it and I still do. I like my family’s very humble hummus recipe — more like a “non-recipe” as you’ll see at the end of this column. My mother served it at adult parties, (“Diane’s weird dip thing”) instead of the universal onion dip.

I love that hummus is now mainstream, although my family and I howl when thinking of how the food culture was far less open-minded than it is today.

Culinary authorities may debate how “proper” hummus is made. Spare me – it’s loaded with great ingredients: beans, seeds, lemon juice, garlic, and whatever other flavors you like. Delicious, nutritious peasant food.

Hummus in the Middle East is like pasta sauce for Italians – every family has their own. Ours is very humble and simple:

• We use less tahini, more garbanzo beans. Why? Best guess is that my ancestors were really poor. Tahini costs more than the garbanzos, so it was used sparingly.

• Ours has more lemon juice. We like the flavor tartness.

• Some grit is good, not pureed too finely.

Spices like cumin or cayenne pepper add a nice flavor and kick, so does smoked paprika. You can even swap out the garbanzos for other varieties: fava beans, edamame, white beans are all good. Here our version, but you’re free to tweak and make it your own:

• Juice of one large lemon

Combine beans, tahini, lemon juice, and garlic in a food processor and pulse a few seconds, just to mix it up. Slowly add some bean liquid (you won’t need all of it) until it’s mostly smooth but still has a little grit, as in the photo. Taste and add salt if needed. If serving later, cover the surface with plastic wrap to prevent drying. Transfer to a serving bowl and garnish with the EVOO and parsley. Sprinkle with toasted sesame seeds or paprika if you like.

What Food SHOULD Be More Popular? 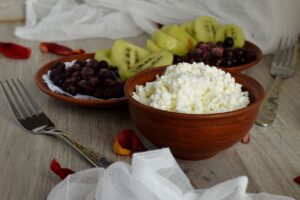 Cottage cheese. Hold on – it’s more than something to eat with a canned peach. Toby Amidor, a National Dairy Council ambassador and author of the best-selling The Easy 5-Ingredient Healthy Cookbook, calls cottage cheese, “One of the most underappreciated foods that is brimming with nutrition.”

One half cup of low-fat cottage cheese is loaded with 16 grams of protein — as much as in 2-ounces of cooked chicken – but only has 90 calories and 1 gram of fat.

“With all that protein, that ½ cup of cottage cheese, can help keep you feeling full because protein takes longer to digest,” Amidor says. She likes it not only for snacking, she recommends “blending it into a creamy, thick consistency and add protein to smoothies, dips, soups, and other such foods.”