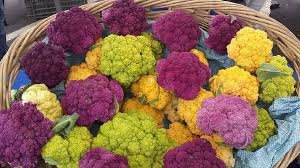 
As much as Myrdal Miller hates kale, “I’m delighted so many chefs and consumers have embraced and totally fallen in love with cauliflower, my favorite vegetable.”


According to Leslie Bonci, owner of ActiveEatingAdvice.com trying to make this fermented, probiotic drink at home, “could be a food safety concern. “Why not eat fermented vegetables like kimchi to get more fiber, and yogurt or kefir for protein?”


Robyn Flipse, of TheEverydayRD.com, said, “The humble bean gets my top vote as the nutrient-rich food most deserving its new-found popularity!” While not fond of their “less appetizing nomenclature, ‘pulses’” or the confusing “legumes”, she’s glad more consumers and chefs are taking their “pulse” at mealtimes now.


How did chia seeds go from holiday joke gift to being a treasured ingredient in smoothies and oatmeal?  Bonci is a huge fan of chia (and of rhyming). One of her Bonci-bites: “We-a love chia! We feed the need with this seed! Fiber and omega-3, make chia good for me!”  She’s right – chia is a nutrient powerhouse and, like many seeds, it’s versatile.  Chia makes far better as a food than a “pet”!

Diet Or Exercise: What Matters More For Weight Loss?

“Exercise doesn’t matter. You just have to eat less”  “Diet doesn’t matter much, as long as you exercise.” A new study in the Journal of Nutrition says being more active...

**NEWSFLASH**  I’ve joined the website The Chocolate Life, as author and contributor.  Check out my posts here.  It’s nearing Valentine’s Day, a.k.a., The Big Chocolate Holiday, and fine chocolate is...

Resolutions? OUT! Habits Are The New Black

One nutrition trend that peaked everyone’s interest in 2020 was “immune-boosting foods”. Understandable, too, with COVID-19 keeping the entire world terrified and “sheltering in place”. Outside the home, people were...

NOTE: I’ve partnered with The Glutamate Association for many years, but this post is strictly my own – all based on science and any views are my own. I love...